The complete guide to visiting Petra, Jordan and Little Petra 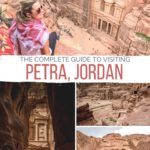 The idea of visiting Petra, Jordan often conjures up images of a place untouched by the hands of time, a lost city where crumbling ruins tower overhead and the arid desert landscape sweeps out as far as the eye can see. And that’s exactly what you’ll find in this immense, ancient site, where travellers marvel at the otherworldly stone formations jutting out of the red earth, while sidestepping the donkeys and camels jostling for space in the canyons’ narrow passageways. 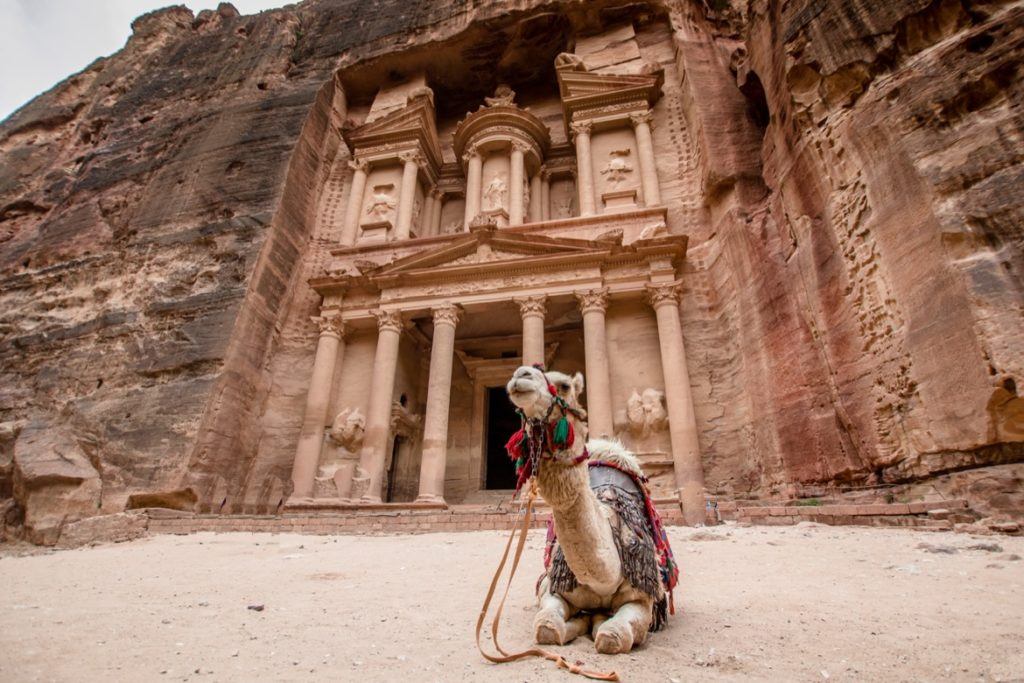 It’s as though nothing has changed since the days of the Nabatean kingdom 2,000 years ago, when the industrious Arab people who carved the now-famous Treasury into a sheer rock face settled here, establishing Petra as an important junction of the silk, spice and trade routes.

Despite its links to China, India, Greece and Rome, by the time the 16th century arrived the city of Petra was completely lost to the west and remained that way for 300 years. That changed in 1812, when a Swiss adventurer named Johann Ludgwid Burckhardt who’d heard of the so-called Lost City persuaded a guide to bring him here, once again putting Petra on the map and eventually leading to its designation as a UNESCO Heritage Site.

Since then, the sprawling park, awe-inspiring carvings and artifacts have earned it a well-deserved spot on the New 7 Wonders of the World list, making Petra one of the top places to visit in Jordan.

As most people are lured here solely by captivating images of the Treasury, they’re understandably mistaken for thinking that’s all there is to see during a trip to Petra…and boy, are they ever in for a surprise. Turns out the ancient city’s footprint is so vast that it takes days to properly explore all of its landmarks, hike through the miles of surrounding trails and visit its scaled-down sister site Little Petra.

Some of the major landmarks to see when you visit Petra include:

The best photo spots in Petra

The wonders found inside Petra are a photographer’s dream, and while it can get crazy crowded in certain spots (ahem, in front of the Treasury) it doesn’t take much to get off the beaten path and find a cool angle for shooting the colourful souks, red rose landscapes and shadows that dance off the canyon walls. Some of the best spots are:

Khubtha Trail: To get that iconic shot of the Treasury from above, head up–way up–the Khubtha Trail. You’ll get a workout in while heading up hundreds of stairs to a plateau, and just a bit further down the trail you’ll find a cafe which leads out to a cliff with a birds-eye view of Jordan’s most famous landmark.

Note: don’t take the other trail that leaves from near the base of the Treasury which many ‘guides’ will offer to take you up in exchange for payment. This is a very dangerous route, since there are many steep dropoff points with no railings on the side.

Petra By Night: Seeing one of the world’s most awe-inspiring sites lit up only by the magical glow of 1,500 candles is the very definition of enchanting, which is why the Petra Night Show is an absolute must for photographers.

Two-hour tours run every Monday, Wednesday and Thursday starting at 8:30 pm, and visitors get to walk through the Siq and end up at the Treasury where rugs are set up to enjoy a 20-minute show with music. If your main goal is photography, then show up half an hour before the gates open and you might be lucky enough to get let in ahead of the crowds, allowing time to set up those long exposure shots without flashing cameras or people in the way. Save precious minutes by taking a carriage ride in, and nab a rug that’s front row and centre.

Royal Tombs: There’s a cool vantage point near the Royal Tombs, which overlooks the vast site below and has some fun rock formations to pose on. It’s a short walk up past the Treasury and Street of Facades, and since it’s not on the main passageway there are usually very few people around.

Booking tours and how to get to Petra

The modest town of Wadi Musa serves as the gateway to Petra, and most visitors will spend at least one night here–especially if they want to be the first ones through the gates to soak up the sight of this enchanting city during the first light of sunrise. There are a few options for planning trips to Petra, including:

Organized tours to Petra: Countless companies offer guided trips through Jordan with a stop in Petra, and these packages typically include accommodation, food, guides and transportation. Experience Jordan Adventures is one of the best, and their itineraries range from multi-day trekking tours that will have you arriving in Petra via the lesser-known, impressive ‘Back Door,’ to epic cycling trips along the Jordan Bike Trail with stops at Jordan tourist attractions like Petra, Wadi Rum and the Dead Sea. Travellers already in neighbouring Israel can easily hop over for a couple days by joining one of these tours from Eilat, Jerusalem or Tel Aviv:

Self-guided trip: This involves arranging your own transportation to Wadi Musa (try renting your own car, booking a private transfer or taking the JETT bus), booking accommodations nearby, and paying the Petra entrance fee upon arrival at the gates. A good option for those with a bit of extra time on their hands, an independent Petra visit allows you to explore the site freely without having to stick with a group, and you’ll have the flexibility of hiring a guide on-site, taking a camel or donkey ride or exploring the surrounding trails.

Day trips to Petra: It’s easy to book one of the daily Petra tours from Amman, but keep in mind that won’t leave you much time to explore the world wonder since it’s a three-hour drive from the capital. Another option is to do a day tour from the seaside city of Aqaba, which is only two hours away and has easy bus connections. Be sure to confirm if your Petra day tour includes entrance fees; some don’t, which means sticker shock at the gates if you weren’t expecting to have to shell out for the approximately $70 USD admission.

Tips to keep in mind during a day trip to Petra

There are a few hotels near the entrance to Petra, including:

Another one of the incredible places to see in Jordan is Little Petra, which is very similar to Petra but a fraction of the size and with way less crowds. Officially known as Siq al-Barid, the site is just a 15 minute drive from Petra near Wadi Musa, and boasts the same high gorges and carved facades.

Little Petra earned the name ‘The Cold Siq’ due to the towering cliffs edging the narrow passageway through the site, which blocks the sun from streaming in. A smaller version of the Treasury welcomes visitors when they pass through the main gate, and continuing through you’ll find steep stone staircases leading up to stone temples, former homes and the Painted House which features a beautifully-preserved, ornately decorated ceiling.

Continue down the passageway that’s lined with a few souvenir stalls, and you’ll suddenly emerge out of the shadows onto a plateau bathed in sunshine, with fantastic views of a seemingly supernatural, craggy canyon.

Where to stay near Little Petra

Ammarin Bedouin Camp: A must-do experience during a Jordan trip is to stay overnight at a bedouin camp, and you can do just that at the eco-friendly Ammarin camp near Little Petra. A series of black-and-white striped tents are nestled at the base of the rocks surrounded by the secluded desert, which is an unforgettable place to hear the enchanting call to prayer as the sun sets, and makes for epic stargazing opportunities.

Guests get a glimpse into what life is like for these nomadic tribes thanks to musical performances, demonstrations about things like their coffee making rituals (which will make you grateful for speedy Starbucks as it turns out grinding beans can be a very long process!) and a hearty dinner of traditional Jordanian food like hummus and zarb.

Tents have twin beds, bedding, power outlets and electricity, and there are shared bathrooms with showers, sinks and toilets. Click to book

Globe Guide explored Petra as a guest of Experience Jordan Adventures, which leads fantastic Jordan tours for all group sizes. As always, hosts have no editorial influence on articles.